This is the soundscape of war, precisely the wailing of an air-raid siren, thunder of B-52 bombs landing before anti-aircraft artillery returns fire during America’s infamous “Christmas bombing” campaign against North Vietnam in 1972. Collectively, these sounds act as a backing artist to Joan Baez in her ballad Where Are You Now, My Son? a snippet of which is played to guests in the bunker of the 364-room Sofitel Legend Metropole (1901), the grand dame of hotels in Hanoi, the capital of a reunified Vietnam. 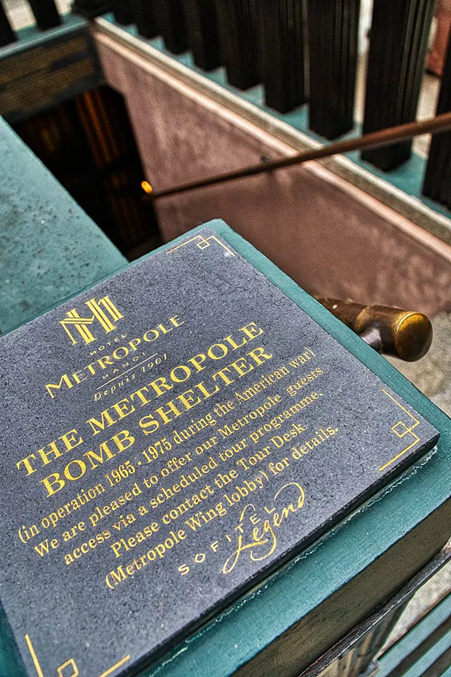 The folk musician retreated to the relative safety of the shelter (mirroring actor-activist Jane Fonda during Operation Linebacker I) and incorporated live recordings (of Operation Linebacker II) into her track, which was written after witnessing a Vietnamese woman search for her son underneath the rubble of a flattened building. Listening to a piercing soprano interspersed with the aforementioned sounds, now, 47 years on, standing in a hunched position donning a green Viet Cong-style hard hat, simultaneously causes cold goose bumps to shoot up on my arms and perspiration to stop dripping from my forehead. 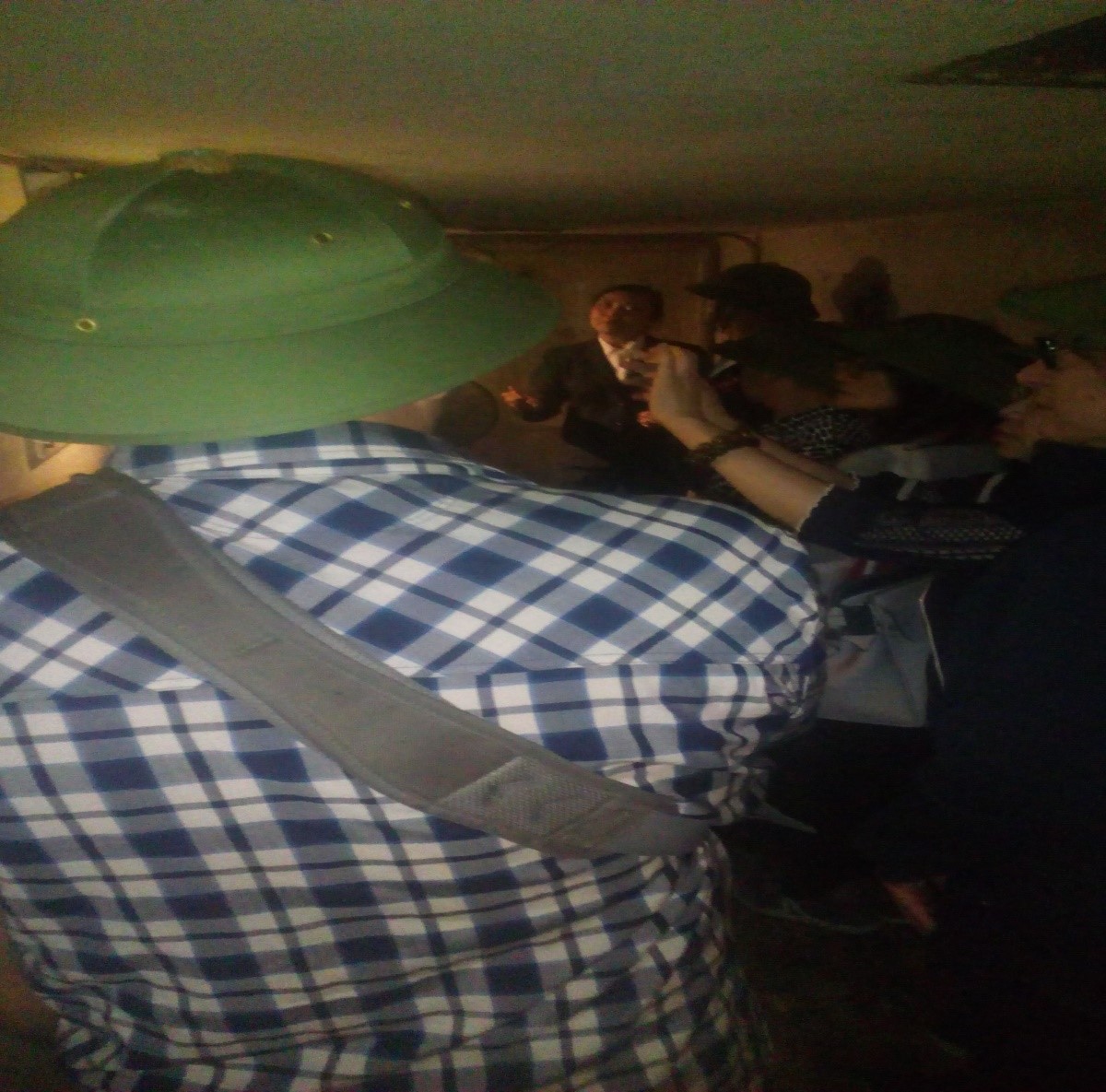 Despite opening its iron door in 2012 the 1965-built, 40-square-metre subterranean refuge retains (unlike the nuclear fallout shelter in Prague’s Jalta Boutique Hotel, home to the Cold War Museum since 2013, which feels somewhat artificial) an unpolished feel about it: redolent with years of dampness, a musty smell accompanies you through its four low-ceilinged interconnecting chambers, wherein old wiring sprouts out from corroded circuit breakers and water drips from ventilation shafts onto sand-coloured walls. An original lightbulb assists the most unimaginative of imaginations to slip back in time to the war era (c.1965-1975), something fellow tour-goers evidently do for emotions appear to have been stirred, with some displaying moistened eyes, others open mouths while one has their head bowed. 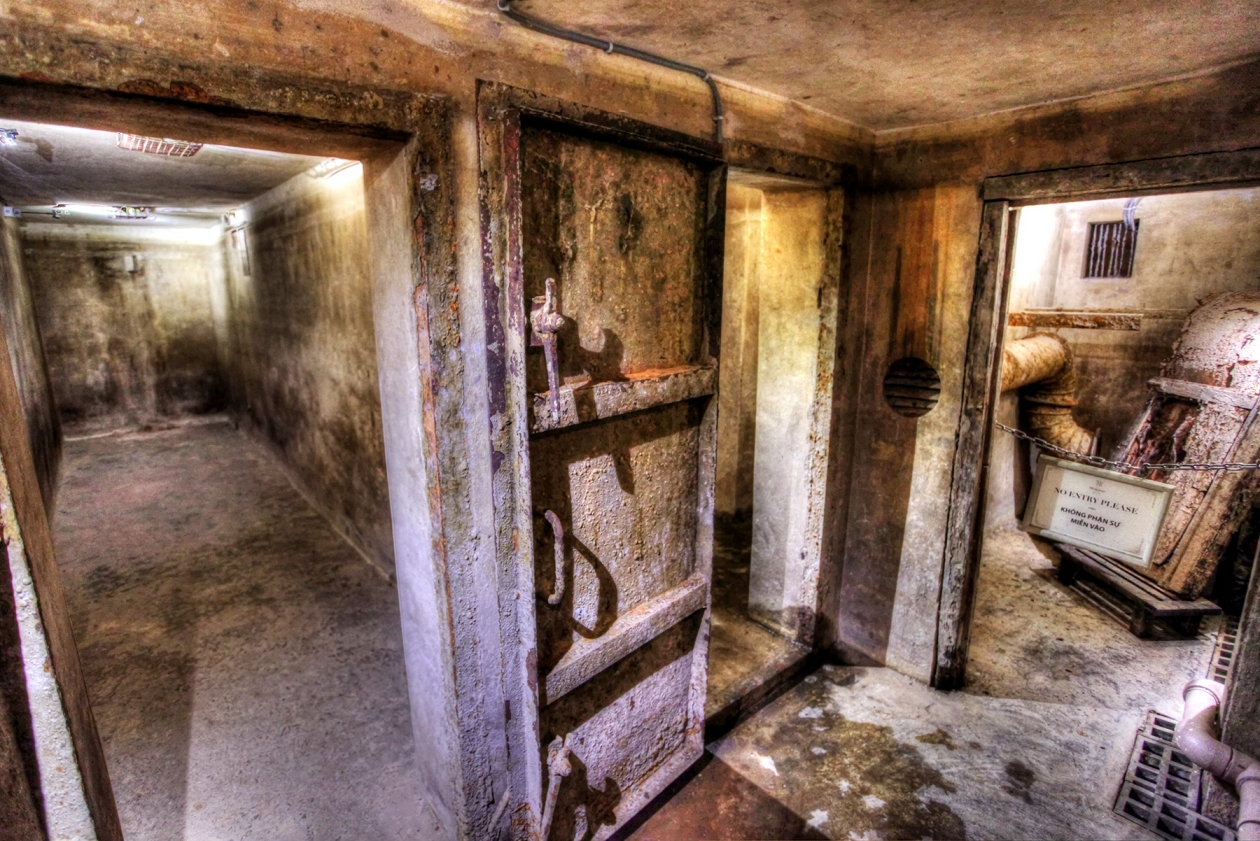 As unique as this UNESCO award-winning site is (four metres beneath the courtyard pool, it’s as claustrophobic as an Egyptian tomb and as hot as a Turkish bath), it doesn’t solely change my Cold Warrior-like hawkish stance; adoption of dovish thinking kick-started earlier on the Path of History tour, specifically in the lobby that preserves the French colonial aesthetic, with its old-world gravitas and where the scent of lemongrass pervades the striking staircase, near the foot of which guide Huyen introduced herself to our 15-strong party.

A petit quinquagenarian wearing a suit and beaming smile and holding a copy of Andreas Augustin’s book on the hotel, she chronicled the property’s storied past: from colonial times to its post-World War Two renaming and recent restorations. Of the 13 exhibition plates lining 18 metres of corridor documenting the Metropole’s 118 years, those listing its 300-odd illustrious guests transfixed all bar me, who bypassed photos of honeymooners (Charlie Chaplin and Paulette Goddard) in favour of Huyen’s recounting of being ‘evacuated to the countryside, where [her] parents visited at weekends’. 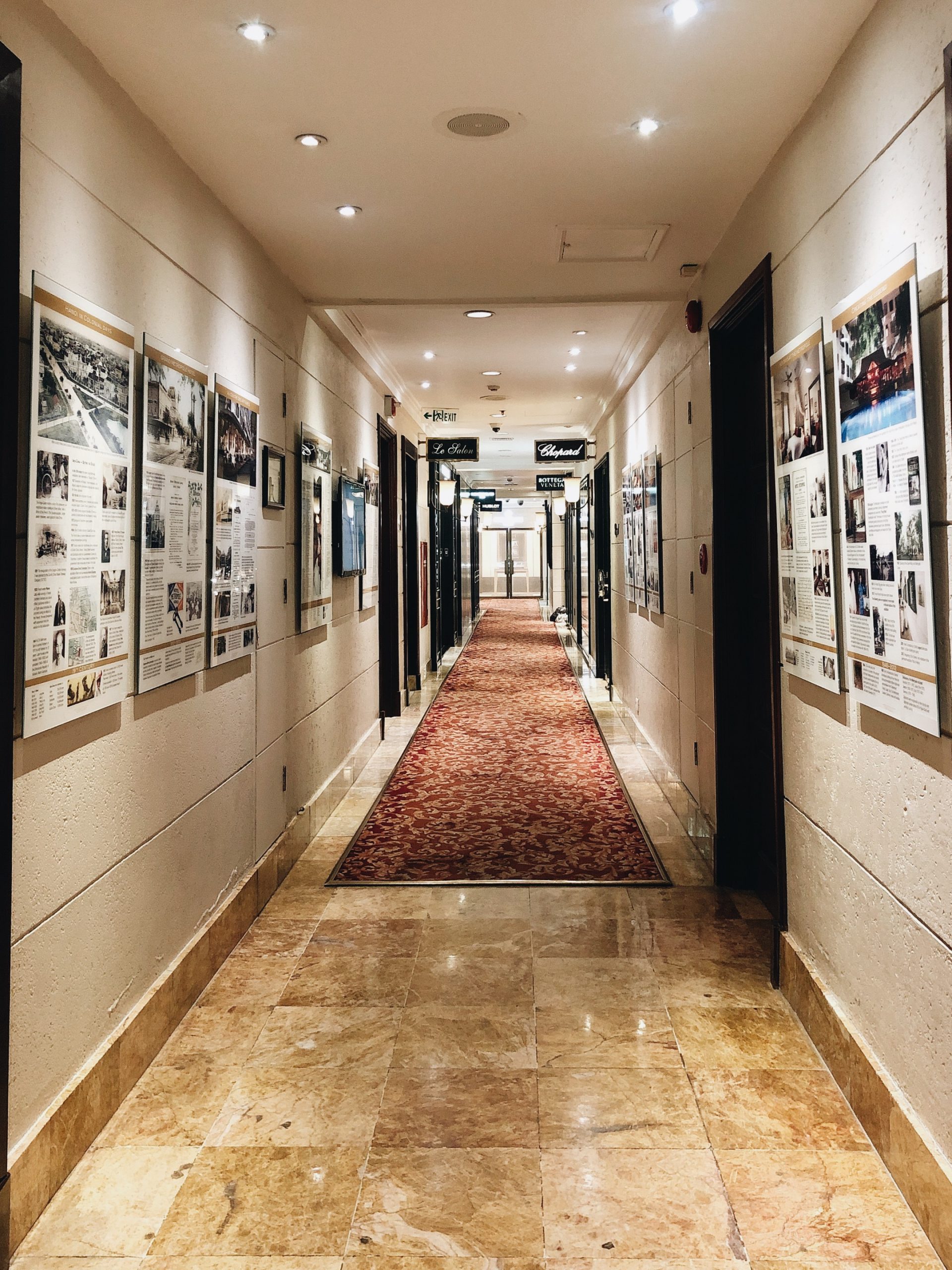 Although a depressingly familiar story of war, Huyen’s expressive storytelling caused a profound melancholy to anaesthetize my jet lag since my late grandmother, Dorothy (‘Dot’), was similarly evacuated to the (Welsh) countryside, where her parents visited at weekends (from near Liverpool in the UK). But this was during WWII, a necessary conflict in which 30,000 tons of explosives were dropped by the German Luftwaffe in six years on Britain; America’s intensive carpet-bombing campaign comprised dropping 20,000 tons, predominantly over Hanoi (causing over 1,000 casualties), in just 11 days – unnecessarily.

I’d gained a graphic insight into these missions at the unapologetically biased B-52 Victory Museum – a two-mile, motorbike-dodging walk from the tree-fringed Hoàn Kiem Lake (which attracts the infirm and energetic in equal measure) via street diners perched on diminutive sky-blue plastic stools and underneath those supping the dessert-like beverage “egg coffee” on a balcony – yet the half-day “authentic” city tour proved less affecting than the forty-five minute one given behind the chalk-white façade and bottle-green shutters of 15 Ngô Quyền Street, outside of which is a transport time-warp of vintage Citroen Tractions and traditional rickshaws.

Being a quintessentially colonial building, the historically conscious may well regard the Metropole as an improper hostelry in which to lay their head. While such reservations are understandable to most, save the ignorant tourist and possibly financially nonchalant, ethical travelers might actually find it more enchanting than repellent given near-all staff – many donning eye-catching ao dai garments – are Vietnamese (not an insignificant fact since luxury hotels routinely prefer a multinational workforce) and that far from all patrons are westerners, probably because the hotel serves as the photographic backdrop of choice for local newly-weds. 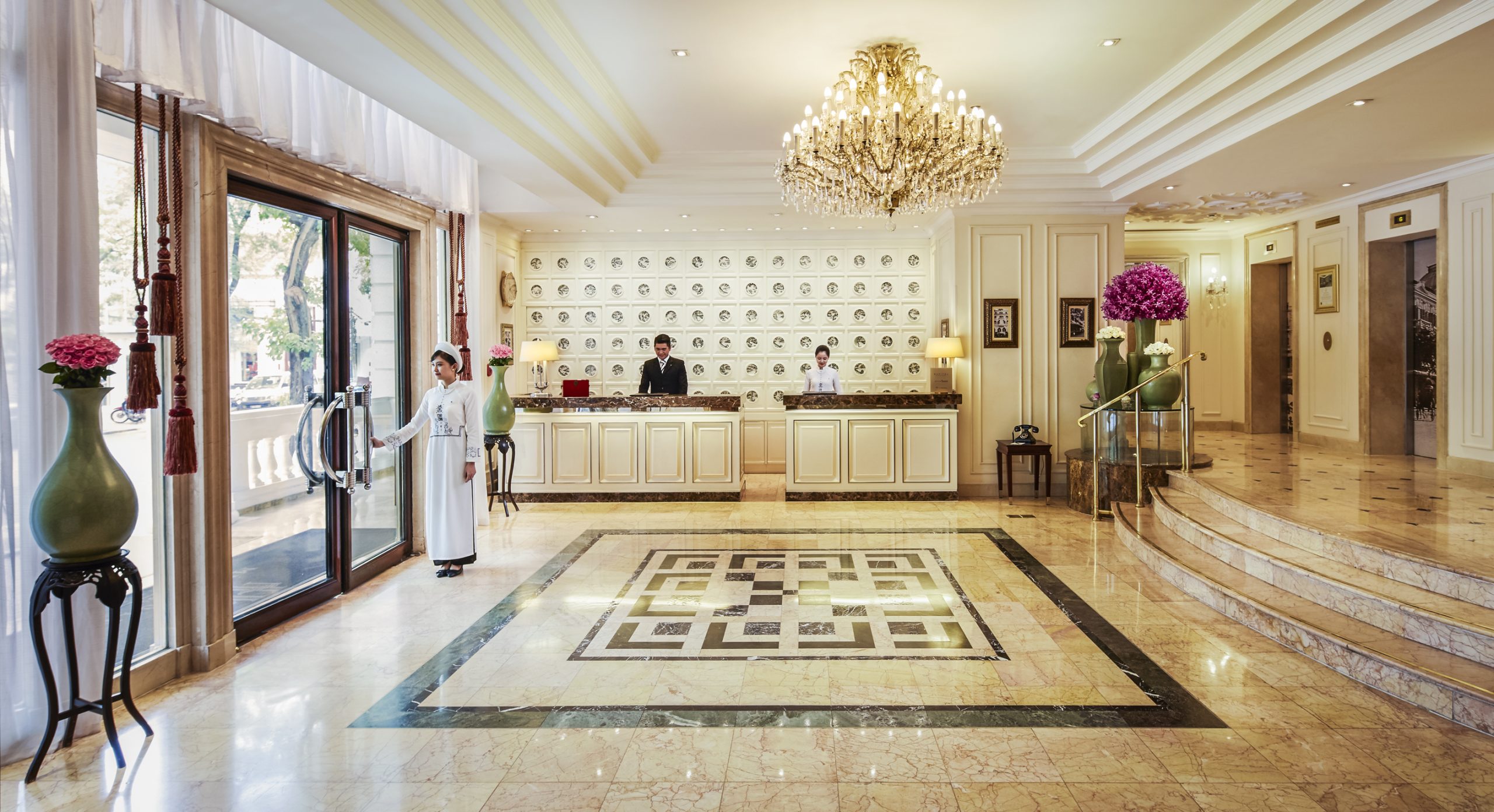 Back in the dimly lit bunker, amidst flashing smartphones capturing graffiti (inscribed by Bob Devereaux, an official at the Australian Embassy, which was housed within the hotel in 1975), I metaphorically see the light: sympathy for those fleeing advancing communists in South Vietnam had hitherto blinded me to the plight of those sheltering from capitalist bombs in the North. Peace may not have been brokered when the Metropole hosted the Trump-Kim summit earlier in 2019 although, unlike the above-referenced uninspiring museum and unengaging guide, Huyen and the hotel transformed me into a peacenik-of-sorts, whereby I conclude that the unnecessary campaign was perchance a microcosm of the wider war. Containing spices that allegedly awaken the senses, it’s only fitting that I order a ‘Joan Baez Cocktail’ when resurfacing and admire Baez’s second artistic chef-d’oeuvre created in the hotel: a portrait (‘The White Flower of Bach Mai’, painted in the Metropole’s Somerset Maughan Suite during her second 11-night stay) of a young Buddhist monk on display near the reception desk. 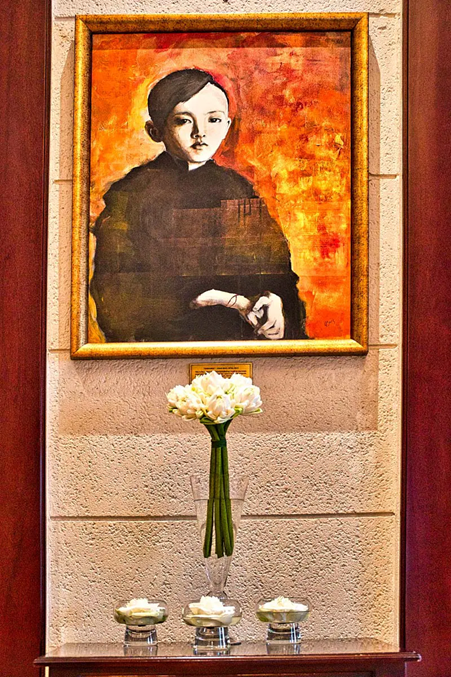